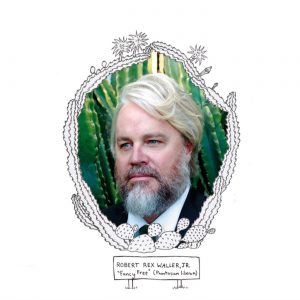 The distinctive deep voice of Robert Rex Waller Jr. is almost always associated with his long-standing California-based country rock band, I See Hawks in LA (ISHILA). So, this solo outing takes some getting used to. The combination of some different instrumentation, electronic touches and some inventive interpretations of some familiar but mostly obscure cover tunes gives us a completely new view of Waller. Waller is also the main writer for his band, but here he puts down his pen and takes on a fun project that he’s probably been longing to do for some time. This could be one of the oddest (and that’s part of what makes it so good) collection of covers on record. These are just some of the names: Utah Phillips, Neil Young, The Oak Ridge Boys, Nina Simone, Bob Dylan, Ray Davies, Mike Stinson and Jim Morrison.

His major cohort and producer for the project is Marc Doten, who also sings harmonies, plays bass and does some other worldly keyboard work. Paul Lacques, Anthony Lacques, and Shawn Nourse from I See Hawks in LA join in. Stellar performances come from jazz violinist Nora Germain, ace accordionist Joel Guzman, and Waller’s dad on piano for “Amazing Grace.” Waller’s scope is ambitious, everything from classic rock to jazz, punk, indie rock and folk are all here. The Nina Simone tune, “Don’t Pay Them No Mind,” was written by Richard Ahern and Bobby Scott who also wrote “He Ain’t Heavy He’s My Brother” and talks about going against the current world to love who you want to love. “Me and Paul” is the oft-covered country song popularized by Willie Nelson and many others. It has special meaning for Waller given his travels with the two Pauls in ISHILA. Rather than take the instrumental break with a Telecaster or pedal steel, Doten uses a synthesizer to give the song a unique feel. Waller’s voice is so deep and rich that he may be the best representation of Jim Morrison that I’ve heard. Check out “Crystal Ship.” And, the obligatory Dylan cover is “She Belongs to Me,” taken at a rather furious rock tempo.

Maybe I’m partial as a long-term I See Hawks in LA fan, but Waller has taken these covers and made them his own. It’s a more interesting listen than usual for an album of cover tunes as he adds some unexpected touches.